> For the multiplayer map in Zero Hour, see Blockbuster.

Operation Blockbuster is the first mission in Modern Combat 3: Fallen Nation. It follows Cpl James Walker on a mission into the heart of Los Angeles to infiltrate valuable intel from the NSA building.

Corporal James Walker and Anvil 1 are deployed in Los Angeles via helo insertion. The team is ordered to infiltrate the National Security Agency building, neutralize all hostiles, secure valuable intel and then move towards the extraction point.

This mission begins from Corporal James Walker and Anvil 1 in a helicopter over Los Angeles to recover a hard drive containing valuable intel located at the NSA building via HELO insertion. After wiping out the KPR troops on the roof, James Walker and his team (Private Kelly and Colt) infiltrate the NSA building. In there, the team download the intel and prevent the enemy from advancing through their location. After the download is finished, they rendezvous via helicopter. However, as they attempt to board, a rocket destroys Echo 9, and everyone in the helicopter/attempting to board the helicopter (except Walker) is killed. Walker is ordered to rendezvous with Turner. He jumps down one floor, kills two patrolling hostiles and ropes down an elevator shaft to assist friendlies in a firefight against KPR hostiles in the building's lobby.

After Anvil 1 clears the lobby, they regroup with captain Turner. But, the roof of the main entrances is wrecked by enemy armour, crushing Walker and Harris. Walker survives and regroups with Turner. After fighting their way to the extraction point they meet up with private Torres, with his wounded teammate private first class Mendoza.

Then Turner orders Walker to take down the bridge pillars to take destroy the enemy artillery. Walker arms himself with a Rampage-4, taking down the bridge's pillars. After tearing down the bridge, Torres and Mendoza are called back to the base. While fighting their way they find another surviving team private fist class Bailey and private Malone. They then retreat to the movie theatre and request extraction but they have to clear the area.

After the briefing, they open the theatre entrance and fire. Private Malone was killed by an emplaced weapon. Turner orders Walker to kill the emplaced weapon crew. After that, The player has the choice to take the turret. Suddenly a KPR attack helicopter fires a missile to destroy the building, but Walker jumps down and he lost his consciousness for a moment. While private first class Bailey is targeting enemy helicopter with a Rampage-4, he is attacked by a KPR trooper when he is punched in the neck and killing him with a rock. Walker then eliminates the assailant and uses the missile launcher to target the helicopter. After destroying it, Walker's team is under attack by an enemy tank, but the tank is destroyed by an incoming airstrike by a US fighter from Hawk 2. Finally, Alpha 6 comes in to extract the unit.

Bravel-1
with an ACOG Scope

Rampage-4
Laying on the ground where Torres is calling for help.

KT-44
Laying on the ground after the helicopter attacks the player on the roof. 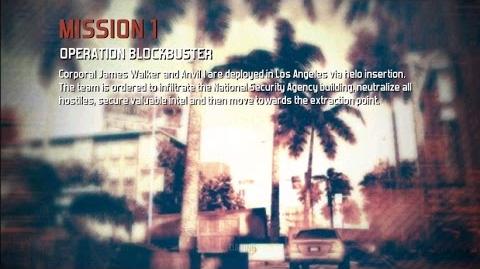