Red Summit is the first mission in Modern Combat 4: Zero Hour. It follows Joel Blake on a mission into the frontlines of a new war erupted by one man, Edward Page.

There are escalating problems at the C3 Conference in Hawaii. The security hired for the summit, Saunders Global Security, attacked the president and took him hostage.

A very large number of US ships, aircrafts, hovercrafts and tanks are sent to secure the president. Blake is in the unit of James Walker, the protagonist of Modern Combat 3: Fallen Nation, and has to take out hostiles and anti-aircraft batteries.

Blake, Walker and two other US soldiers are onboard one of the landing hovercrafts. They storm the beach to clear out the enemies at the first building. All soldiers survive the firefight, and head to the next SGS positions as mentioned by Walker. Walker and Blake need to clear a path to reach the SGS positions.

A ground drone was provided to Blake on the other side of the cave. He controls the drone and uses its turret to clear out enemies on the beach and the building at the cliff. The drone gets destroyed by a missile, so Blake and Walker advance to the entrance of the building. Walker kicks the door open and is attacked by a presumably wounded SGS soldier (his hand was pressing against his chest to apply pressure to the wound) knocked Walker to the ground and attempting to kill Blake with a knife. Blake blocked his attack and head butts him, stunning him and allowing Walker to kill him with a knife. They meet a couple of US soldiers guarding an exit point of the building. They inform Walker and Blake that command doesn't want to bombard the beach, so the team is on their own. Walker ordered them to plant a C4 Explosive on the door. They clear out the enemies on the deck outside, which claims a US soldier's life.

Blake and Walker drive to their next location of the resort complex by a US light utility vehicle. On their way there, they are chased by an SGS attack helicopter, which attacks them with missiles. A bridge ahead was taken down by the enemy helicopter, but Downs had enough time to turn off to an alternative route, which led them straight into a SGS occupied territory. When Downs turns into a route through a tunnel, enemy soldiers at the turn are taken out by an explosion, possibly a missile from the helo. When they reach the other side of the tunnel, the helo had been waiting outside, but is shot down by Blake. Downs drives the vehicle straight down to a broken bones and it successfully lands on the other side of the stream. They exit the vehicle as they were ambushed by enemies. After the enemies are taken out, they destroy the enemy AA vehicle at the site. During the explosion, a gate was also destroyed.

The area of the resort is again filled with enemy soldiers. Knight couldn't send in reinforcements until the second AA battery was destroyed. Blake picks up the CTK-88 Crumplor rocket launcher to destroy the AA vehicle on a deck outside of the second building. The team storms into the building to clear out the enemies, where allied reinforcements arrive within a minute. Blake, Walker and Downs advance to the last building of the mission, where the remaining SGS soldiers are eliminated. Walker and his team overlook the situation and the results of their actions.

SOCAR-S A1
Carried by SGS personnel

CTK-88 Crumplor
Laying on the ground during the anti-aircraft battery segment
MC4-Crate.png
Crate

US soldiers fighting SGS soldiers, along with a Hover Drone

Walker and Downs overlooking the situation 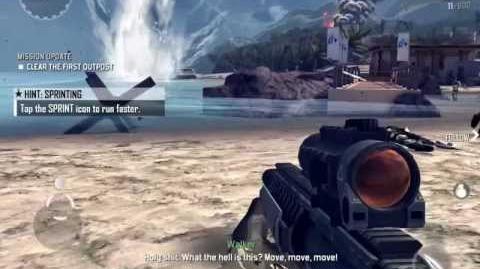 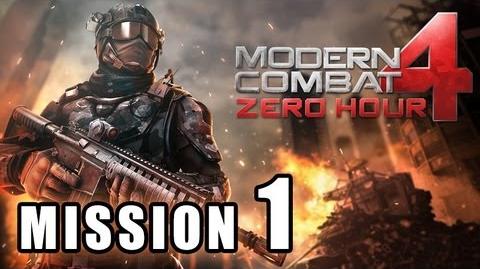 Retrieved from "https://moderncombat.fandom.com/wiki/01:_Red_Summit?oldid=72240"
Community content is available under CC-BY-SA unless otherwise noted.