Thunder Hill is the third mission in Modern Combat 3: Fallen Nation. Anvil 1 is sent to the top of Mount Lee to take over a radio station.

The mission begins in the eyes of James Walker, as he and Mendoza are regrouping with allied troops. On the way however, bombed by enemy artillery. They run for their life and soon encounter the rest of Anvil 1. They call in an air strike to take out an enemy tank, but the KPR has an anti-aircraft battery nearby. Captain Turner and Walker are ordered to take out the AA batteries, fighting through waves of KPR hostiles, eventually encountering the AA-battery located on the balcony of a mansion. Turner places a C4 charge on the battery and Walker detonates it. With the AA battery out of commission, Walker and Turner fight off multiple hostiles before regrouping with the rest of Anvil 1. They proceed towards the radio station, fighting through vast majorities of hostiles. As they arrive at the radio station, they are ordered to hold out until backup arrives, and a massive firefight begins.

Turner then tells Walker and Mendoza to cover him. He jumps out of cover, and attempts assaults the base alone, but is killed by enemy gunfire and explosions. Reinforcements come in shortly after and Mendoza tells everyone that Turner is killed in action.

Sgt. Downs comes through to Walker via Mendoza's comms, and informs Walker about Phantom Unit, telling him that they are raiding a "hellhole known as Alaska". He asks if Walker wants to join and the mission ends.

Maiden
Carried by some KPR troops

.44 Revolver
Found in the garage of the mansion where the AA battery is located. 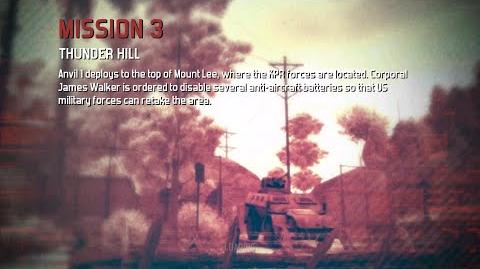 Retrieved from "https://moderncombat.fandom.com/wiki/03:_Thunder_Hill?oldid=59979"
Community content is available under CC-BY-SA unless otherwise noted.