Threatcon Delta is the fifth mission in Modern Combat 4: Zero Hour. It follows Joel Blake on a mission to rescue the president from Edward Page.

Knight informs Walker that Page has captured the president. Walker, Downs and Blake descend into a resort through the skylight. As they look around, they realize they are surrounded, and the president is nowhere to be found. Walker is informed that a group of civilians are being held hostage in the tech center, where the president may be, and may be their only chance to recover him. They run into resistance, but continue towards the hostages. They breach a room, containing hostages and enemy forces, though they neutralize them without casualty. They do not find the president with the hostages, so they move forward through the resort.

The duo make their way into an auditorium filled with enemy forces. As they take them out, they notice there is a bomb in the vicinity. Walker requests a Explosive Ordnance Disposal unit, but Knight informs them they didn't make it, so Walker has to take point. Blake makes his way to the podium, where the bomb is, and disarms it. Walker and Blake move throughout the complex as it collapses, running into numerous enemy forces. They eventually make their way towards the roof, where they find the president, being used as a shield by Page, on a helicopter that soon takes off. Walker and Blakes communications become jammed, leaving them unable to track the helicopters movement, losing Page, and president Burke. 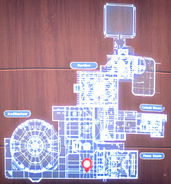 Directory of the Iakoo Resort.

Logo of the Iakoo Resort on a drape.
Add a photo to this gallery

Retrieved from "https://moderncombat.fandom.com/wiki/05:_Threatcon_Delta?oldid=53325"
Community content is available under CC-BY-SA unless otherwise noted.