The ACM is an assault rifle that appears in Modern Combat 3: Fallen Nation.

The ACM is a moderate damage, moderate rate of fire assault rifle sporting average range and a 30-round magazine.

The ACM is a fairly uncommon weapon in the campaign. The player starts with an ACM with a Holographic Sight in the missions Cold-Blooded and Chaos Factory, and a few ACMs with no attachments can be found in Hostile Territories.

Unlocked at rank 16, the ACM is a powerful mid-ranged weapon. The gun boasts good damage, an average rate of fire and decent accuracy. Optics are a popular choice due to the cluttered iron sights, and Extended magazines will give the ACM a magazine size of 45 rounds for sustained combat. A Grip is also a popular choice, since the gun has a jerky omnidirectional kick that can throw players' aim off. The ACM excels in close-mid range combat, due to having high damage among assault rifles, albeit not as high as the KT-44. If recoil is controlled, the ACM can be effective out to longer ranges, however this is ill-advised as the weapon's recoil gets unpredictable quickly when under full-auto fire and due to the number of other stronger longer ranged weapons, like the TZ4-Compakt assault rifle or sniper rifles.

The ACM's appearance in first-person. 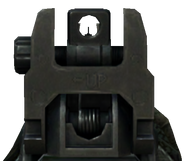 Firing the ACM while aiming down sights.

The ACM in the armoury

A US Army soldier with an ACM

Downs armed with an ACM in Chaos Factory.

Retrieved from "https://moderncombat.fandom.com/wiki/ACM?oldid=63199"
Community content is available under CC-BY-SA unless otherwise noted.