In both games it features a bridge connecting two cliffs, with buildings on either side of the bridge. Long sight lines and open areas make this map ideal for snipers.

The map consists of a long bridge, separating the two team's zones.  Overall there is a lot of medium-long range combat, with sniper rifles and assault rifles being used the most.

This zone is presumably the ideal vantage point for snipers. There is a cargo train, which has a particularly large gate, allowing snipers to aim directly with a lot of cover. Campers can hide in the side of the train, which is dark and is hard to spot you from enemies. Sniper vantage points are also located at the right end of the zone, which is a very dark place, and very hard to spot.

There aren't many sniper vantage points, and the area is vulnerable to enemy snipers because snipers from the train (mentioned in the Phantom section) can overlook the area. However, one ideal vantage point is a very little space in a train wagon. Being shot through the wood is unlikely.

This map has the longest sight line in any Modern Combat game, making this map very ideal for snipers. There are sightlines that extend over 100 metres, making sniper rifles mandatory should the player want to engage enemies at said distance. It is very similar to the predecessor's map, however slightly different, as it features a longer bridge, slightly more cover on the bridge, and larger and more fortified spawn locations. Just like the map from MC3, there is a bridge in the center (albeit longer) connecting the two team's spawn areas. 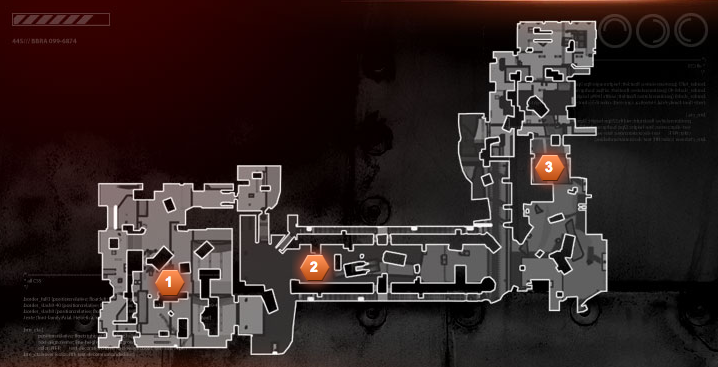 (1) Garage: A large, open area with plenty of spaces to hide and sneak around your enemies.

(2) Bridge: A long line of sight makes this area perfect for snipers. Use your cover wisely and don't forget the gantries on either side for an easy escape.

(3) Maintenance Bay: Another large area. Good use of cover here is key to survival.

This side of the map contains a large building, with two entrances on each side. The entrance on the left side is wide and large, and large numbers of snipers tend to stay there. On the right side, there is an entrance not easily visible from the SGS side because of large crates. This enables snipers to hide and snipe without getting detected. Combat inside the building is rarely seen. There are two floors, with the second floor acting like a balcony.

This side of the map also has a large building, but instead on the front side of the map, it is on the right side, and is smaller. There is a large space on the left side, with crates and a unusable building concealing it, which is useful for snipers.  The disadvantage is that there are two ways to the building, so that enemies can flank you easily.  However, there are more camping sites around this building ideal for surprise attacks. When playing Capture the Flag, the flag is in the building, but since the building is smaller and therefore being easier to defend, the flag is easy to defend.

The bridge has a lot of crate obstacles along the way, so that players can take cover and assist each other. There is a forklift with the back open around the center of the map, so that a player can hide inside.

Concept art of the base
Add a photo to this gallery

Retrieved from "https://moderncombat.fandom.com/wiki/Alert?oldid=60628"
Community content is available under CC-BY-SA unless otherwise noted.