Edit
watch 01:36
We're Getting Mutants in the MCU - The Loop
Do you like this video?
Play Sound

Armor Cores are a type of equipment in Modern Combat 5: Blackout. They can be collected by the player and equipped to the player's Armor suit to add unique enhancements and perks.

Armor Cores were introduced in Update XV and replace the former Suit Abilities and Suit Perks.

Armor Cores fall into 3 categories based on the type of enhancements they offer - Offensive, Defensive, and Utility. With each Core type ranked as either Common, Rare, and Epic. (A special Joker Core also exists for upgrading Cores, as outlined below).

The player must have a complete matching suit of Armor equipped to equip any Cores (e.x. custom armor setups cannot equip Cores). Each Suit has between 2-4 slots for equipping cores, with each Core slot designated for a specific Core category. (e.x. the Hazard suit has 1 Defensive Core slot, and 1 Joker Core Slot). Each armor suit has 1 or more "Joker" Core Slots, which can equip any Core regardless of it's category. Cores can be equipped to multiple Armor suits and loadouts at the same time.

Armor Cores can be acquired by purchasing Combat and Armor Packs, and won as prizes by participating in Events. They can also be acquired as end of match rewards in Duel mode.

Most Cores can be upgraded from Mk1 up to MK5 by exchanging surplus Cores in the player's inventory of any Core type. (Some Epic Cores such as the Neckguard Core do not need to be upgraded). The amount of surplus Cores in the inventory the player has to exchange to upgrade a Core to the next level depends on the value of the Core being upgraded, as well as the value of the Cores being exchanged. (e.x. Higher-tier and higher Mk Cores tend to have a higher value).

To upgrade a Core, the player must select an equipped Core from their loadout's armor, and click the Upgrade button. A menu will then display showing the surplus Cores in the player's inventory which can be sacrificed to perform an upgrade (Cores which the player already has equipped to a loadout will not display here); clicking the tab on the bottom-left will cycle between the the Core categories (Offensive, Defensive, Utility, and Joker). 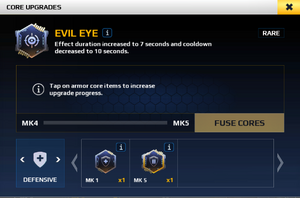 Below is a list of Armor Cores available in MC5. Other than the Cores noted as class-specific; Cores can be equipped by any class on any suit of armor. The min-max stats of each Core based on its upgrade level (e.x. Mk1-Mk5) are also listed: 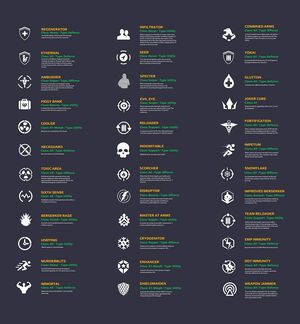 Joker Cores are a special Core type which cannot be equipped and are used solely for upgrading existing Cores. Joker Cores fill up the Upgrade Meter by a significant amount.

Changes from prior game versions[]

As of Update XV, all Suit Perks and Suit Abilities were removed and replaced with the new Armor Cores.

Most suit Perks and Abilities which were originally class-specific (e.x. the Seer Ability for the Recon class's Izanagi Armor) can only be equipped by that specific class, while others can now be equipped by any armor on any class (e.x. the Kemono armor can now equip the Yokai Core, which used to be an Ability only for the Oni Armor). In addition, several Cores offering brand new perks were introduced as well (such as the X1-Morph's Cooler Core).

As of Update XVIII, all armor suits were given at least 1 Joker Core slot, and had their total number of Core slots downgraded by 1 (e.x. the Elite Nova armor was downgraded from 5 Core slots to 4 Core slots).

The following a "tier list" of Armor Cores ranked based on their viability in high-league multiplayer gameplay. (Cores not listed are considered mid-low tier and as such may not be viable in higher leagues) - keep in mind this list is not official and is subject to change.