The Beretta M9 is fairly common in the campaign, with the weapon being given to the player as a starting secondary weapon in most missions. The alternative variant of the Beretta, the NX8 Handgun, is the first weapon awarded to the player in the level "The Great Escape", making it the first pistol to appear in the Modern Combat series. The Beretta M9 is a versatile weapon, with a skilled player able to clear out enemies with ease, due to the fact that a headshot with the Beretta is an instant kill, and coupled with the great accuracy of the weapon.

Unlocked by default, the Beretta M9 is capable of killing in 3 shots, or 1 headshot up to close-mid range. It is fairly uncommon online outside of a few skilled players. While many players prefer a weapon with more power for a secondary weapon, the Beretta should not be underestimated.

A large 15-round magazine, great accuracy and the ability to kill with a single headshot means that with some practice, the Beretta can outmatch even an assault rifle, and practiced players have even been seen to snipe with the weapon. 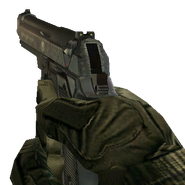 The M9's appearance in first-person. 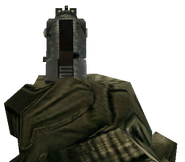 World model
Add a photo to this gallery

Unlocked at level 28, the Beretta M9 gains a Suppressor on the end of the weapon, and while the pistol gains a small loss in damage, now taking 4-5 body shots to kill, it benefits from a fantastic increase in accuracy, rivaling even the Dradonitch.

This is the more common variant of the Beretta, as by this time, many players will have learned to utilize the Beretta's accuracy to its full potential. Even though there is no radar available in Modern Combat 2: Black Pegasus, the silencer is a bit nerfed by this, as it offers no protection from injury tracking (screen turns red, with bloody arrows pointing towards attack direction), as that would make up for its basic purpose; stealth. 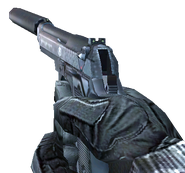 The M9 Silenced's appearance in first-person. 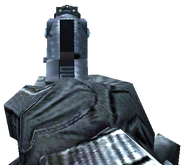 Iron sights of the Beretta M9 Silenced.
Add a photo to this gallery

The Beretta 92F is one of two pistols appearing in Modern Combat: Domination, It has a 15 rounds in one clip, does moderate damage and has moderate accuracy. It is first unlocked at Level 1. The Mercenaries use the N8 Handgun, which also appears in Modern Combat 2: Black Pegasus. But unlike in MC2, there are minor changes on the N8 such as different rear sights and a lighter color.

Aiming down the sight

Beretta M9.
Add a photo to this gallery

Retrieved from "https://moderncombat.fandom.com/wiki/Beretta_M9?oldid=60836"
Community content is available under CC-BY-SA unless otherwise noted.