The Black Mamba is Edward Page's secondary weapon of choice, therefore appearing in every mission where Edward Page is the playable character. In the campaign, the weapon is a very high damage, semi-auto with a low fire rate. Holding down the fire button allows for continuous fire, as opposed to the multiplayer version, which demands constant tapping of the fire button. It will usually kill in 1-2 shots. It is based off of the Chiappa Rhino.

The Mamba also makes a brief appearance in the ending cutscene of Red Summit, however, it is not available to the player.

Available for purchase in the armoury for a shallow 20,000 credits, the Black Mamba is a heavy, single-action revolver that chambers a large .338 Magnum cartridge. The large caliber fired by the Black Mamba is reflected in-game, as the Black Mamba has the highest damage of all the secondaries per shot, excluding the grenade launchers. Up close, when ADS, the Black Mamba will kill in one-shot, and with JHP rounds, the close-range damage of the Mamba when ADS is increased to 148, making it possible to down even Paragon Juggernaut enemies in one shot. The recoil of the Mamba is very high, but the weapon counters this by having a decent centerspeed, as the recoil will completely settle after each shot.

However, there are some severe downsides to this weapon that turns a lot of players off. The most noticeable of which is the lethargic rate of fire. Being single-action, the rate of fire is restricted to a lethargic 60 RPM, or one shot per second. This incredibly low rate means that follow-up shots with the Mamba are extremely difficult to execute. It truly is a weapon that requires your first shot to connect. Another noticeable downside is that the iron sights are misaligned. However, if you use the Mamba up close, the misalignment isn't an issue.

Another quirk to the Mamba is that it cannot achieve one-hit kills when hip firing, even with JHP rounds. It will deal 99 damage when hip firing up close. However, if an enemy has been nicked once by a teammate or by a stun grenade, hip firing will prove more effective.

One of the more effective ways to use the Mamba is getting up close and personal. Since this weapon deals one shot kills up close when ADS, utilize the high mobility. The hip fire box with the Mamba is small, which allows for precision targeting acquisition. When you encounter an opponent, when the hip fire box is over them, aim and fire quickly. This allows for quick disposing of enemies up close.

The iron sights are misaligned, with the actual point of bullet impact is near the bottom of the yellow/orange post. The misalignment isn't a big issue if you use the Mamba as an up-close and personal weapon or using the "quickscope" tactic. It is only at close to middle ranges were the misalignment is an issue.

Despite these flaws, the Black Mamba is incredibly powerful up close, and it is the only bullet-based secondary that can achieve one hit kills. It performs somewhat of a niche role, and is mostly seen in the hands of high-skilled and talented players. 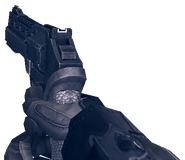 The Black Mamba's appearance in first-person.

Iron sights of the Black Mamba.

Firing the Black Mamba at an enemy. Note the high visual recoil.

Firing the Black Mamba when aiming down sights. Note the high visual recoil.

Inserting the cylinder into the Mamba.

Sprinting with the Black Mamba.

The Black Mamba, as it appears in the armory