The Bravel-1 is an assault rifle that appears in Modern Combat 3: Fallen Nation.

The Bravel-1 is a fairly common weapon in the campaign. The player starts with one with an attached ACOG Scope in Operation Blockbuster, as well as Hostile Territories, and Surgical Strikes in which it also has a suppressor and Red Dot Sight. It can be found in Martyrdom with a Red Dot Sight and a Grip attached.

Unlocked by default, the Bravel-1 is a good, balanced starting weapon, with low recoil, open iron sights, medium rate of fire, large crosshairs, high accuracy and a small magazine. Its relatively medium damage means that FMJ bullets make a marked improvement, and paired with an ACOG Scope, can make a great long-range weapon. The grip's usefulness is questionable, since the Bravel does not have much recoil. Due to the small 20-round magazine capacity, the Extended magazine attachment may also prove useful.

The Bravel-1 is a common weapon, even among higher-ranked players, thanks to its ease of use and high rate of fire.

The Bravel-1's appearance in first-person. 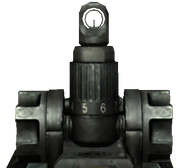 The Bravel-1 in the armoury

Anderson armed with a Bravel-1.

Retrieved from "https://moderncombat.fandom.com/wiki/Bravel-1?oldid=63451"
Community content is available under CC-BY-SA unless otherwise noted.