The COM 4 is a launcher in Modern Combat 5: Blackout. It was added to the game in the June 2015 update.

The COM 4 is the Tier 7 rocket launcher of the Heavy class. It is a multi-barreled rocket launcher capable of unleashing 4 rockets back-to-back without reloading (with a delay of about 1 second in between launches). With the Boombastic skill fully upgraded, it receives an extra 2 rockets in reserve for a total of 6 rockets - twice the ammo of other rocket launchers in its class.

While it has lower damage statistics than the HEV Mk 51 and CTK-88 Crumplor, the COM 4's high armor penetration rating, better fire rate, and decent blast radius give it many advantageous, particularly against enemies with high explosive protection.

The COM-4 is a fairly popular launcher in higher-league multiplayer. While it lacks the rate of fire of SLAK 7H, its range makes it more viable for long-distance engagements or as an effective counter-sniper weapon, and its ammunition will not deplete nearly as fast.

The COM 4's appearance in first-person.

Iron sights of the COM 4.

Blast radius of the COM 4.

The COM 4's stats and appearance, as seen in the armoury. 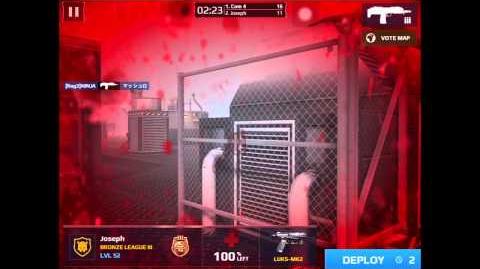 MC5 COM 4 gameplay
Add a photo to this gallery

Retrieved from "https://moderncombat.fandom.com/wiki/COM_4?oldid=69282"
Community content is available under CC-BY-SA unless otherwise noted.