Not much information is available about Phoenix' life before the events of Modern Combat 4, only that he lost his wife during the birth of his daughter Lily.

Phoenix debuts in Modern Combat 4: Zero Hour, in the mission Aftermath. He is first seen with another AFTER operative. After Anderson uses a ground drone, Phoenix moves into a building with Anderson, and they rappel down to rescue two hostages. Phoenix stays with the hostages while Anderson goes after the terrorists. It is unknown what happens to him afterwards, and he was likely extracted.

Phoenix is the main character in Modern Combat 5: Blackout. He is sent to Venice, Italy along with Bull under command of Gilman Security to intercept a terrorist attack by the World Liberation Army and prevent the theft of chemical weapons being stored in Venice by the UN.

At Gilman headquarters in Tokyo, Phoenix explains to his superior Roux that the attack on Venice was actually a cover-up for something bigger, and that higher-ups at Gilman Security attempted to silence him by threatening his daugther Lily. However before he can explain, he is knocked unconscious in an explosion from a WLA chemical weapons attack in downtown Tokyo, and wakes up a month later in Rinnoji Temple, which has been converted into a makeshift hospital for refugees of the Tokyo attack.

After waking up in Rinnoji Temple, Phoenix finds that the temple has been overrun by a street gang known as the Raiders. Phoenix makes his way out of the temple and rendezvous with Isaac Tukura, who make their way to Roux's safehouse in downtown Tokyo and deal with the pursuing Raiders.

After the safehouse is secure, Phoenix finishes explaining the truth about Venice to Roux, and how the WLA attacks on Venice was actually a cover-up orchestrated by Gilman Security to steal the chemical weapons, which were then used in the attack on Tokyo. Roux also shows Phoenix an intercepted message between Bull and Gilman CEO Kirk Bancroft, revealing Bancroft as an alias for international terrorist Everett Saunders who has been masterminding the WLA attacks in an attempt to start a major world war, with Bull having been on Saunders' payroll the entire time.

Afterwards, Phoenix and Alex Hawk head to Ryogoku to spy on a negotiation between Saunders and Bull. After spying on the meeting, Phoenix kills Bull with a sniper rifle at Roux orders and escapes the area for extraction.

Phoenix along with Hawk and Tukura are then sent by Roux to infiltrate Gilman HQ in Tokyo and steal data confirming Gilman and Saunders' involvement in the terrorist attacks. After stealing the data from the mainframe, Phoenix heads to the roof of the building for extraction where he is confronted by Saunders, who contacts him by radio and threatens his daughter Lily. After Saunders' helicopter shoots down Phoenix's extraction chopper, Phoenix shoots at Saunders' cockpit, causing it to crash onto the roof and kills Saunders in the ensuing struggle.

After the death of Saunders, Phoenix is contacted by Roux to discuss the aftermath of the incidents in Tokyo and Venice, and reveals that his daughter Lily is safe and that he is with her now. Just as their conversation wraps up, Roux tells Phoenix to wait, as she's just received important notice of a new assignment. 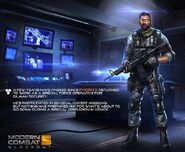