The Flash grenade (commonly called "flashbang") is a non-lethal grenade that appears in every Modern Combat game.

The Flashbang is one of the two grenade types in the game, the other being the Frag Grenade. Just like the frag, the flashbang detonates on impact. It blinds everyone who sees it for approximately three seconds.

The Flashbang is unlocked at Rank 9. Rank 22 and Rank 32 each expand the carrying capacity by one, resulting in a maximum of three.

The Flash Grenade is one of two different tactical grenades that appear in Fallen Nation.

Flash grenades only appear in Façade and in the Shooting Range.

It is best used when turning corners, as an enemy may be around, and will be incapacitated long enough to be ambushed. Experienced players can throw flashbangs through windows to ensure that everybody in a building is blinded.

Walker watches as a flashbang is rolled in front of him. Note that this is a special flashbang due to its blind sign design. 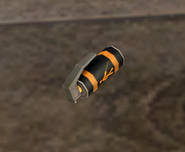 Closer view
Add a photo to this gallery

The CTK-84 Flashbang (Charbtek CTK-84 Incapacitating Grenade, Flashbang in-game) is an incapacitating grenade manufactured by Charbtek Corporation. Those affected are blinded for a maximum of four seconds, while those facing away from the blast or standing outside of a 10 meter radius are affected less.

The CTK-84 is used by AFTER forces in Unified Terror. (Not on older devices)

Although the appearance of this grenade in multiplayer is rare, the flashbang is proven useful with the Stealth perk Opportunism combined with the large range of effect it is very effective to mow down enemies in large group. It is best paired with a Tactical Mask.

The Flashbang, as seen in the Armory.

Stun effect of the Flashbang.
Add a photo to this gallery

The Flash grenade explodes instantly upon touching any surface, and blinds everyone in the vicinity for 4 seconds. (In the Campaign, the grenade will startle enemies and cause them to move from their position (like other grenades do) but has no other noticeable effects).

NOTE: It should also be noted that the Flash grenade is the only grenade which can affect the player themselves as well as their teammate.

Flash grenades also have the highest capacity of any grenade type, with players receiving 2 by default (the Assault class receives up to 4 with the Improved Gearbox Skill.

In order to get the most from the grenade, it's best to throw it at the enemy positions and then quickly look away - since if the player is are not directly looking at the grenade as it explodes it will not blind the player. When the player is blinded by a flash grenade, they need to rely on their radar to keep note of nearby enemies and walls. Overall the flash grenade is an under-rated grenade which can be very useful if used right.

The Flash grenade's appearance in the Armoury.

A player effected by a flashbang.
Add a photo to this gallery

Retrieved from "https://moderncombat.fandom.com/wiki/Flash_grenade?oldid=69990"
Community content is available under CC-BY-SA unless otherwise noted.