The High-MOA only appears in Threatcon Delta on the CTK-1410.

This sight can be purchased for 8,000 credits. It almost completely removes the accuracy penalty while turning when aiming down sights. This attachment is very useful combined with the Paragon Striker skill to go around corners with no accuracy penalty and at normal walking speed.

However, the High-MOA RDS does have a large frame and darkened tint, making it less useful than the other optics at longer ranges. Still, the reticle of the High-MOA RDS still remains fairly precise, meaning that long-range shots can be pulled off.

High-MOA RDS is available on the following: 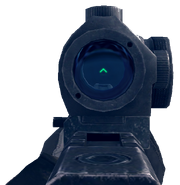 The High-MOA RDS, as seen in the armoury.
Add a photo to this gallery

The High-MOA RDS is an unlockable sight for assault rifles, submachine guns, shotguns, and light machine guns. It features a 3X zoom and offers an alternative to the Aim ACOG and Drop Compensator scopes. It tends to be commonly used in multiplayer, however, as it has a rather low precision reticule.

Retrieved from "https://moderncombat.fandom.com/wiki/High-MOA_RDS?oldid=63912"
Community content is available under CC-BY-SA unless otherwise noted.