The Hover Drone is an unmanned aerial vehicle (UAV) that appears as an enemy weapon and as a player-controllable weapon in the campaigns Modern Combat 4: Zero Hour and Modern Combat 5: Blackout, as well as Military Support in Modern Combat 4.

In the campaign, the Hover Drone is used by Carter to assist Blake while he tried to secure Saunders in the mission Critical Path.

The Hover Drone has 4 rockets and 80 minigun rounds to kill SGS soldiers defending Saunders. Even if these weapons run out of ammunition, after a short moment of not using these will result in instant refill of bullets.

The rocket launcher on the Hover Drone fires missiles that inflict instant death for any hostile within the blast radius, and with one missile, it can destroy an unarmored vehicle, such as a car, with just one hit, and can destroy tanks in two hits.

The hover drone is controllable by the player in:

The Hover Drone requires 8 kills to use it in multiplayer. (With Military Tactician it will only need 7 kills.) The drone is not manually controlled and can only fire its machine gun. It is most effective at open areas such as in Alert. But it would not have access to enter buildings so it is not suggested to get this support in smaller maps.

If a Support class with the Paragon Saboteur perk equipped comes near the drone, the drone will be disabled and will fall to the ground, destroying it. A CTK-88 Crumplor can also lock on to the drone, knocking the drone out of the air with just one hit.

Hover drones are first encountered as hostiles in the mission "Hot Spot" where they attack Phoenix and Turkura while they are being pursued by Raiders, and are encountered in various later missions. Hover drones are fairly easy to shoot down even with small arms, and chaff grenades can also be used to temporarily disable drones in the area from firing. In the mission "Support", Phoenix pilots a drone remotely to defend the Gilman Security squad against WLA terrorists in Venice (which can fire both machine gun rounds and rockets). In the mission "Infiltration", Hawk is killed after a drone collides with the elevator he and Phoenix are riding to the top of the Gilman Security HA, causing him to fall off the elevator to his death.

The Hover Drone in the opening cutscene of Modern Combat 4: Zero Hour 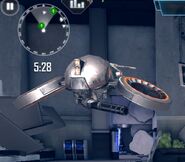 The hover drone in Overtime.

Retrieved from "https://moderncombat.fandom.com/wiki/Hover_drone?oldid=64944"
Community content is available under CC-BY-SA unless otherwise noted.