Isaac Tukura is a character who appears in Modern Combat 5: Blackout.

Tukura is first seen in Ambush along with Andrews, after they extract Phoenix from Rinnoji Temple and head off to Roux's safe house in downtown Tokyo. They are ambushed by the Raiders and Andrews is killed, leaving Tukura and Phoenix fight their way to Roux's safe house on foot. After clearing the safehouse, Tukura parts from Phoenix, who ventures back into the city streets with Hawk to deploy jammers. 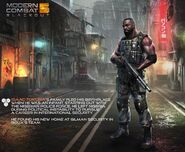 Tukaru and Roux being assisted by Phoenix (sniper) in Italy.
Add a photo to this gallery

Retrieved from "https://moderncombat.fandom.com/wiki/Isaac_Tukura?oldid=71975"
Community content is available under CC-BY-SA unless otherwise noted.