It was founded by rogue generals Dobrynya Popovich and Tong along with ex-US Green Beret Edward Page. After the death of Pablo Al-Banni during Operation Black Pegasus, one of the escaped leaders of Pablo's terrorist cell, Popovich, Managed to escape US custody and sought an alliance with rogue North Korean general Tong to form a military power against the United states.

A few years after operation Black Pegasus, the KPR launched an attack on the West Coast of the United States by bringing down their communications and defense systems which paved the way for deploying several WMDs on major US cities. At first the United states was caught off guard by the sudden invasion but managed to secure a hard drive in the NSA building which contained vital intel. Anvil-1 with members James Walker were sent to Los Angeles to recover the hard drive. This was the first part of Operation Blockbuster.

They are again seen transporting troops through bridges around US Urban areas, and the AC-130 squad is sent to destroy the transport routes and eliminate them. (02: Sacrifice) Following the destruction of KPR transport routes, the KPR makes their last stand at Mount Lee in Hollywood against the attacking U.S. Forces. Amidst heavy fighting and the death of Turner, the KPR are defeated.

Walker and Sergeant Downs were sent to Alaska to investigate the whereabouts of the Razor squad that went MIA.They fight through local KPR resistance, but succeeds in rescuing the survivors of the Razor Squad, Anderson and Starks. KPR forces failed to catch the fleeing members in the resulting car chase(04: Hostile Territories, 05: Chase). The KPR presence in the United States was finished off by an operation by Phantom Unit onboard their carrier Yongwang which rested on the Bering Strait as their forward operations base. As a result of the destruction of the carrier, the KPR no longer posed a viable threat towards the U.S. mainland.

There are four branch of soldiers in KPR seen in game. First one is North Korean troops clad in silver, green, and red BDU who are seen on American west coast and North Korea, Second is regular Russian troops in red camouflage seen in Alaska and inner Missile silo, Third is Arctic Russian troops seen in Siberian weapon factory, the last one is Al Akrab, Pakistan based terrorist organization.

Despite being a terrorist group, the KPR Alliance is surprisingly well armed, to the point where they possess an aircraft carrier and multiple aircraft (including Stealth Fighters) at their disposal. Throughout the game, they are seen wearing ballistic vests, helmets, and gasmasks.

KPR Alliance in the opening cutscene of Operation Blockbuster.

A KPR transport helicopter being destroyed in Los Angeles during Operation Blockbuster.

A propaganda poster found in various places around Alaska featuring both General Tong and Popovich which reads "Destroy the US, In unity is strength" 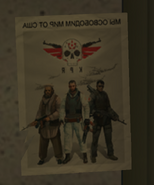 The KPR logo in the Kolodny Weapons Factory

The KPR alliance isn't seen in Modern Combat 4, but they are mentioned in the second mission by SGS soldiers, the SGS helped the KPR cross the Mexican Border and into America. Also, there is a damaged KPR transport helicopter in the multiplayer map Landfall.

It is unknown why the leaders of the KPR defected from their former countries.It looks like soldiers KPR Only North Koreans in the coalition wear uniforms regularly