In Modern Combat: Sandstorm, the M249 is a very uncommon weapon, used only a few times by the player, and never by enemies.

The M249 is suited for a slow, methodical style of play. Low movement speed, high ammo counts,, high rate of fire, high damage and decent accuracy mean the player is capable of slowly sweeping a level and rooting out enemies. The rear sights move back and forth to simulate recoil, but there is no actual recoil that needs to be compensated for. Because of these traits, the M249 is a fantastic weapon for the single-player campaign.

The M249 is available by selecting the Heavy Gunner class in Multiplayer. The weapon performs the same as it does in the campaign, and as such is less common online due to the massive reduction in movement abilities. A common tactic is to simply camp an area and essentially act like a Turret, denying the enemy an area with the sheer volume of fire they can lay down. The M249 is generally ignored in favor of weapons that allow a faster play style.

The M249's appearance in first-person..

Iron sights of the M249.
Add a photo to this gallery

The M249 returns in Modern Combat 2, sporting updated visuals, with a carrying handle and a rail mount on top, forward of the rear sight apperatus. The gun features a new firing sound, a slightly faster firing speed and more accuracy in comparison to its previous incarnation.

The M249 is uncommon online, usually seen in the hands of newer players. Also, many players prefer the M249 on smaller maps such as Facility due to the lack of a need for high movement speeds.

The M249 features a high rate of fire, good accuracy, medium recoil and low movement speed. The mobility rating of the M249 is the lowest in the game, and even affects the player's aiming speed. The accuracy of the gun is fairly good, and the power is very good, killing in only 2-3 shots, and combined with the high rate of fire, the M249 is one of the fastest killing automatic weapons in the entire series up close. Its recoil is fairly mild, and with its large box magazine and decent accuracy, the M249 fufils an Overwatch-type role well, and can be used to good effect in a high-traffic area, such as the middle of the Jungle map. The reload time is where the M249 stumples, however. players should keep an eye on their ammo count, as it is very easy to be overwhelmed in the middle of the long reload. 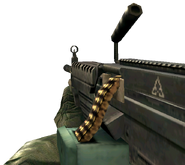 The M249's appearance in first-person. 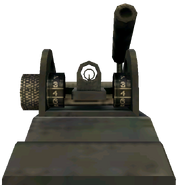 Retrieved from "https://moderncombat.fandom.com/wiki/M249?oldid=60778"
Community content is available under CC-BY-SA unless otherwise noted.