The MAC11 is a submachine gun that appears in Modern Combat 2: Black Pegasus.

The MAC11 is fairly common late in the campaign, with South American enemies being fond of it. The MAC11 is a good backup weapon, with a high rate of fire, good accuracy and low power.

Unlocked at level 3, the MAC11 performs the same way as it does in the campaign, and is a good backup weapon for snipers or players carrying a heavy primary weapon, such as the M249 or the RPG-7. While it does have very low per-shot damage, its extreme rate of fire allows for quick disposing of enemies up close, able to go toe-to-toe with many of the automatic primary weapons up close. The reload speed of the MAC11 is also very swift.

However, there are some severe downsides to the weapon. Most notably, is its high rate of ammunition consumption. 32-round magazines can be left empty in just around a second, making reloads very frequent. The MAC11 also has extreme muzzle flash and recoil when aiming down sights, making it ill-suited to aiming down sights.

Despite its flaws, the MAC11 can be a powerhouse up close, despite being somewhat of a niche weapon. 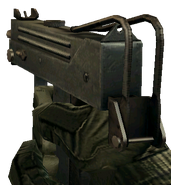 The MAC11's appearance in first-person. 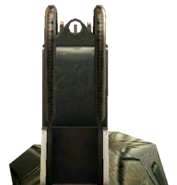 Iron sights of the MAC11.

Firing the MAC11 while aiming down sights.

Unlocked at level 39, this version of the MAC11 gains a silencer, which both increases the damage and accuracy of the weapon. The damage drop-off is still roughly the same, so similar tactics apply to the Silenced version as to the unsilenced.

The MAC11 Silenced's appearance in first-person.

Iron sights of the MAC11 Silenced.

Retrieved from "https://moderncombat.fandom.com/wiki/MAC11?oldid=60866"
Community content is available under CC-BY-SA unless otherwise noted.