The MC81 is an SMG that appears in Modern Combat 3: Fallen Nation.

The MC81 is an extremely common weapon in the campaign, and is the main primary weapon for the majority of the KPR forces. The gun can be found in every mission except for Dragon King of the Sea, Cold Blooded, Chaos Factory, Sacrifice, and Martyrdom. The MC81 is normally found without any attachments, but it can be found in Facade with a Red Dot Sight, and in Surgical Strikes with a Holographic Sight, as well as a rare silenced version. The weapon handles exactly as it does in multiplayer, though it can kill enemies faster, due to damage multipliers added only in campaign.

Unlocked at rank 3, the MC81 is a versatile weapon with low damage, high accuracy, high mobility and a high rate of fire. The iron sights are very open and clear, negating the need for any optics, which frees an attachment slot for something else. The nearly non-existent recoil and high accuracy make up for the low damage of each individual round, and allows the MC81 to be used for long-range combat with an ACOG Scope with surprising effectiveness. FMJ Bullets are also recommended, as the low damage of the gun can be a problem in some situations, especially at mid-range

Despite the low damage output, the MC81 is still a force to be reckoned with at close range, having a very fast time to kill up close. Its nonexistent recoil and clear iron sights ensure that it can still be competitive at mid-range.

The MC81's appearance in first-person. 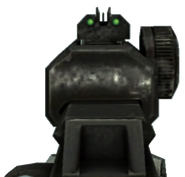 Iron sights of the MC81

The MC81 in the armoury

Anderson armed with an MC81 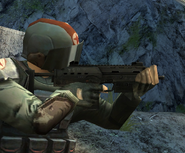 Retrieved from "https://moderncombat.fandom.com/wiki/MC81?oldid=63210"
Community content is available under CC-BY-SA unless otherwise noted.