The MK45 is a pistol that appears in Modern Combat 3: Fallen Nation.

The MK45 is a common sidearm, it can be seen in a few missions, notably Dragon King of the Sea. The MK45 is similar to its predecessor, the Beretta M9, having low damage, a higher rate of fire and a large magazine.

Unlocked by default, the MK45 is a fairly common sidearm online, thanks to its good magazine size, accuracy and fire rate. The Extended magazine attachment is fairly redundant due to the already large 12 round magazine. FMJ rounds are considered to be more useful, since the MK45's biggest flaw is the lack of power. Despite being weak if used as a primary weapon, the MK45 can serve very well as a "finishing" weapon when your primary runs out of ammo in the clip. 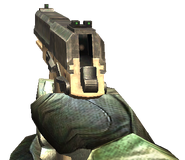 The MK45's appearance in first-person. 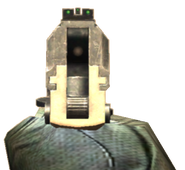 Firing the MK45 while aiming down sights

Walker being handed a suppressed MK45

Retrieved from "https://moderncombat.fandom.com/wiki/MK45?oldid=71703"
Community content is available under CC-BY-SA unless otherwise noted.