He is introduced in the first mission of MC2, The Great Escape, where he and Newman are held captive in an unknown area. He then returns in 'To the Summit', based earlier than his previous mission. He helps out taking down main leaders before being captured with Newman.

Magnus Downs was US. ARMY Soldiers

Downs is in an enemy stronghold, held captive for two weeks along with Newman, he eventually escapes, and goes to Newman to free him. After he regains consciousness, Downs escorts Newman out, killing a guard by throwing him off the cliff, allowing Newman to grab a weapon.

Downs and Newman fight several guards, destroy towers, and an enemy vehicle. Once it is destroyed, Downs tries to open a gate/door with his shoulder, though he rams it with so much force he heads over a cliffside. He manages to cling on long enough for Newman to lift him up.

The duo continue to move through the compound, eliminating any and all threats nearby. They eventually make their way towards a larger door, though it is locked, leading Downs to discover they are being ambushed. Newman is wounded, and Downs takes cover as enemy forces fire at them from the hall. Downs tosses a frag grenade in hopes of allowing an easier escape.

In Modern Combat 3: Fallen Nation, Downs holds the rank of Sergeant and is the leader of Phantom Unit. He and Walker go to Alaska to rescue Razor Squad only to find Starks and Anderson, who (along with Washington) join Phantom Unit.

They go through North Korea and Pakistan. After being captured by Popovich in Façade, they escape. After fighting their way out and securing the nukes, one nuke explodes in mid-air, killing all enemy soldiers. Walker saves Downs, fights and kills Popovich.

In the third mission, Anvil 1 secures a radio station in Los Angeles. Downs is first heard at the end of the mission giving Walker the chance to join the Phantom Unit.

Walker joins the squad and both go on a mission in Alaska to find the missing Razor Squad.

After only find 2 members they escape on a truck with Walker taking out enemies on the back with a Light Machine Gun. Soon after, Anderson joins the squad.

Dragon King of the Sea[]

Phantom Unit soon goes and assaults a ship called the "Yong-Wang". A new member called Washington joins the squad making it 4 people in the squad. They all jump out and free falling. As they are going to pull out their parachutes, Walker notices that his one is broken, he pulls out his reserve just in time but soon hits the water. He is saved by the squad and they seperate, Downs with Washington and Anderson with Walker. Anderson and Walker soon discover prototype planes. Anderson turns on the controls and Walker moves up to regroup with the others. Downs tells Walker to go in and active the controls. Washington goes in to see how Walker is doing and they soon get out and fly out.

The planes are built in factory in Siberia. Phantom Unit is sent there to take out the factory.

Walker and Washington move up into sniping position while Downs and Anderson wait for them to clear the path. Walker is equipped with a Intercept L-200 with the Thermal Sight and Silencer attachments. Downs and Anderson enter the factory but are spotted. Walker and Washington join the assualt on the factoy. Eventually they split up with Washington going to help Downs out. After Walker activates the train doors, he runs to regroup with the team. He encounters heavy resistance but makes it through, When he is almost at the with the team, a grenade hits him, he is knocked onto the floor but rolls under the door and regroups with them.

They soon split up again with Downs with Washington and Walker with Anderson. They rig charges around the place and try to escape. With Walker and Anderson placing charges, Downs and Washington searching a round to find more intel. Soon Downs and Washington meet with heavy resistance. They call Walker and Anderson for backup and soon evacuate the place. They soon find out that there is another target out there working with the KPR

Phantom Unit is then deployed into Pakistan trying to find and takedown a man called Edward Page operating under the name of "Zealot". They are given fire support by Carter but is shot down. Downs and Anderson move into the area to try save Carter but runs into heavy resistance and calls for backup. Walker and Washington come and help Downs and Anderson. Downs and Anderson stay behind to find survivors while Walker and Washington continue with the objective. They soon run into a sniper but is taken out by a friendly helicopter. The sniper was Edward Page. After moving to the sniper's position, Washington is shot by Page. Walker goes solo and tries to find Page. He ends up finding him and do some hand to hand combat. Downs and Anderson come to help Walker out with Anderson tackling Page and interrorgating him. They find out where General Tong is hiding.

When the mission begins, Downs is seen being held prisoner by two KPR guards, and the KPR guards say "One more joke about Russians and I'm going to put a bullet in his head. I don't care what Popovich said, I can't take it." Downs comes up with another joke and beats the KPR guards. He rushes to Walker's cell, freed him, and handed him a KT-44. After they battle through the facility, they find and equip the ZN6-Prototypes that they used in the previous mission. While resistance is heavy, Downs and Walker manage to abort the launch of two of the WMDs. As they head to the third nuke, they encounter Popovich inside the control room for the third WMD. Popovich shouts "You should know that I'm not taking you alive this time!" and flees the control room. Downs and Walker find a way in and Walker tries to abort the launch, but Popovich had changed the code. Downs instructs Walker to rig the missile with C4, and after fighting through minor resistance, Walker plants the explosive on the third missile. They then exit the facility, where they find the last of Popovich's men trying to take down Walker. All of a sudden, the third missile crashes nearby, resulting in a massive explosion and Walker is knocked unconscious. After recovering from the blast, Walker finds Downs being beat up by Popovich. He pulls out his knife and attempts to stealthily take out Popovich, and the two have a scuffle. Walker then swiftly stabs Popovich in the neck, then impales him on a steel bar from a fallen radio mast. Downs stares at Walker and says "Saved my damn life", before Downs radios for evac and tells them that Popovich is dead and the nukes are out of commission. While helicopters swoop over to extract Walker and Downs, Downs considers the beverage options available in Korea. 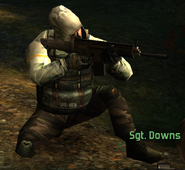 Downs armed with a Bravel-1

Downs equipped with a TZ4-Compakt

Downs armed with a ZN6-Prototype

Downs being rescued by Walker

In Modern Combat 4, Downs' appearance is almost completely different. He has brown hair instead of blonde, brown eyes instead of blue. His voice actor also differs between MC2/3 and MC4.

Downs returns in Modern Combat 4 Zero Hour as a supporting character. He first appeared in the first mission, Red Summit, helping Walker and Blake to find the president. Later he appeared as a minor in mission 4, New World Order, trying to buy more time for Walker and Blake to escape and hunt down Page. He later gone with Walker and Blake to find Everett Saunders, the leader of the SGS. After Blake accidentally threw Saunders off a balcony, the unit went to the headquaters of the SGS in South Africa. He and Blake tried to find the president at the end of the mission, Hammerstrike, but his helicopter was shot down leaving Blake falling to a basement, while Downs remained on the chopper.

Warning: spoiler below. Move cursor to read the text.
After rescuing the president, Downs and his team went to Antarctica stopping Edward Page to create the ultimate doomsday weapon. Downs, Blake, Walker and Anderson made their way to the antartic base. Blake and Anderson made their way to a lab which had H5N1 virus in various containers. Anderson opened a door and refused to let Blake in, Anderson was spotted by Page. After Anderson's death Edward survived the C4 explosion. When Downs and Walker were planting the C4 on the computers to delete all the data. Page shot Downs shoulder, while Walker was trying to kill Page. Upon being nearly killed by Page, Blake stabbed him on the neck saving Walker and the injured Downs. Walker and Blake assisted the injured Downs to the extraction zone. When they arrived, Walker nonchalantly ordered Blake to detonate the C4 explosives, to turn the Unified Citizens' base into a "pile of scrap".

Downs tossing a C4 detonator to Blake in Hammerstrike

Downs taking point with a Charbtek-28 in Operation Shogun