Modern Combat: Domination is an online low cost multiplayer first person shooter developed by Gameloft for PlayStation 3 and Mac. The game features both a single player mode and multiplayer mode. The game is the third Modern Combat game to be released, after Modern Combat 2: Black Pegasus. It also supports the usage of Playstation Move controls.

The game was taken out of the Mac App Store sometime in the first half of 2014.

There are two factions in the game: Special Forces and Merceranies.

There are 5 maps in-game and 32 weapons.

Screenshot of a game in Team Deathmatch

Special Forces soldier, as seen in MC:D in "The Hideouts" (note a modified 1st SFOD-D patch) 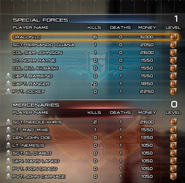 Retrieved from "https://moderncombat.fandom.com/wiki/Modern_Combat:_Domination?oldid=61795"
Community content is available under CC-BY-SA unless otherwise noted.