> For the map in Modern Combat Versus, see Sandstorm.

}} Modern Combat: Sandstorm is the first installment in the Modern Combat series developed by Gameloft. It was released in August 2009, and was removed from the App Store in September 2014.

Gameplay in Modern Combat: Sandstorm is similar to that of Call of Duty 4: Modern Warfare or other contemporary military shooters. Players control their character with a virtual joystick on the left side of the screen, while looking around the game's enviroments is controlled by swiping or dragging on the screen. The player can also crouch, throw grenades, use their weapon's iron sights, reload, change weapon, pick up different weapons, melee enemies and shoot using buttons and prompts on the touch screen.

American Warrant Officer "Chief"' Warrens returns to active duty in the war against terrorism in the Middle East and reunites with his old squad, composed of soldiers named Dozer, Ryan, Fox, and Jones, the Captain. After completing a training run, Chief is immediately taken with his squad to an area believed to be being used as a terrorist radio outpost. The squad splits up and travels around the area, destroying a number of radio towers, before regrouping in a Palace. Their extraction chopper is shot down by the terrorists, and so they are forced to defend the Palace from a large number of terrorists before being safely extracted in a Humvee. During the mission, the squad notice how the terrorists seemed to be ready for them and begin to suspect the presence of an informant.

The squad are then sent to a hospital in order to capture Abu Bahaa, a terrorist warlord, who is apparently undergoing an unspecified surgery there at the time. Chief and Dozer infiltrate the hospital through the sewer system below, while Ryan and Jones wait outside. Ryan is killed in this mission. Upon reaching Bahaa's room, Chief finds that they have been tricked; the hospital has been rigged with explosives and a dummy corpse has been placed in Bahaa's hospital bed. However, he and Dozer manage to escape unscathed, while also protecting Jones, who has been wounded.

After Jones recovers, the squad break into a dockyard which Bahaa is using to conceal a nuclear weapon. They discover that the terrorists actually have an enormous base underground, the entrance hidden within a shipping container. Chief is sent in to find the nuke - he encounters Bahaa inside, but is forced to leave him in order to locate the bomb, which could be detonated by the terrorists any minute. He eventually finds the nuke and is able to secure it, while Bahaa flees outside and attempts to escape in a truck. The squad pursue him in a humvee, chasing him out of the dockyard and through a train tunnel, before eventually managing to flip his truck just as he reaches the highway.

The squad find Bahaa lying by the truck, still alive, and Dozer prepares to capture him; however, Jones betrays the squad, killing Dozer and taking Fox hostage. Bahaa taunts Chief, saying that he is weak and that he has no choice but to surrender, but Chief shoots Jones, who falls to the ground with Fox. Bahaa pulls two Fragmentation grenades from his jacket and prepares to blow up both Chief and himself, but Fox pulls him to the ground and tells Chief to run. Chief takes cover by the Humvee as both Bahaa and Fox are consumed by the explosion.

For all of his efforts, Chief is promoted and becomes known as a hero. He travels to Fox's residence and meets his wife, informing her of his act of martyrdom and how he saved his life.

Multiplayer was released in a free update in December 2009. Online multiplayer is class-based and similar in presentation to the singleplayer Campaign, with two teams of two players battling on three different maps.

Modern Combat: Sandstorm features two multiplayer modes, Team and Solo, which are selected before each round by the game's Host.

There are three multiplayer maps in Modern Combat: Sandstorm:

Multiplayer features four classes which players can select prior to joining a match or after being killed.

Multiplayer is affected by severe spawn trapping caused by a poorly written spawning algorithm. This can often result in the player spawning in the same spot multiple times, at the complete mercy of any enemy that is aware of the opportunity to take advantage of it.

Reception for Modern Combat: Sandstorm was positive, with most reviewers citing the game's graphics, aggressive AI and controls as strong points. The game was rated highly across the board, and continues to have a small following online, even years after its creation. 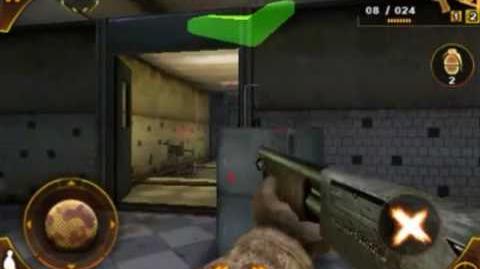 Removal from the Apple App Store

Modern Combat: Sandstorm was removed from the Apple App Store sometime in September 2014, just five years after its initial release. The reasons for this are unknown. Players that have the game installed on their iOS device can still continue to play the game. It is also possible to re-download the game from the 'Purchases' tab in the App Store. Multiplayer servers are still online and functional.[3]

Sandstorm was never added to the Google Play Store, but any Android user that has the app file can still download the app data from Gameloft's servers. The game's availability status on other platforms is unknown.

The removal of Sandstorm coincides with the removal of other popular titles, such as N.O.V.A. and N.O.V.A. 2. This could signal that other older games may also be at risk.