Gameplay in Modern Combat 2 is similar to that of Call of Duty: Modern Warfare 2. Players control their character with onscreen controls, the layout of which can be changed. The player can also crouch, throw grenades, use their weapon's iron sights, reload, change weapon, pick up different weapons, knife enemies, mantle obstcles and shoot using buttons and prompts on the touch screen. In addition, players can now customize the placement of the on-screen controls to better suit their preferences. The graphics have advanced slightly over Modern Combat: Sandstorm, with a slightly increased polygon count, though the same engine is used. The single-player campaign also boasts new Quick-Time Events to add a new level of excitement to the gameplay.

The game starts with the player taking control of Mustang Squad's Private Newman, who is imprisoned in a prison camp operated by Pablo al-Banni. Newman is questioned by Pablo through a Translator before he is knocked out with a rifle butt to the head. Fellow squadmate Private Downs rescues Newman, and then they attempt to make an escape. After Downs knocks out a guard unaware that the prisoners are free, Newman acquires an NX8 Handgun and later an AK-47, and the two attempt to fight their way out of the compound.

The game then enters a flashback following Lt. "Chief" Warrens, the player's character from Modern Combat: Sandstorm, and Delta Squad. They assault an oil rig in the Middle East to find Khalis Ghazi, who is believed to be a member of the terrorist organization established by Abu Bahaa. The player clears rooms of enemies and fufills various objectives until he is attacked by Ghazi himself, who is promptly disarmed by the player. While they wait for extraction, Ghazi is coerced into revealing his superior's identity.

The player then takes control of Sergeant Anderson, a member of Razor Squad. They escort Azimi, ambassador of an unidentified Middle Eastern country, to the United States embassy using a Humvee The player moves from rooftop to rooftop, eliminating various enemies and the occasional tank, until the Humvee and the player are funneled into a courtyard, where they are ambushed by waves of enemies and tanks.

The player then takes control of a mounted gun on the Humvee they just escorted as they travel to the American Embassy, battling waves of enemies, troop-carrying trucks, and a helicopter.

Next, the player sneaks through a snowy landscape littered with the remains of a wrecked airliner to reach a derelict power plant where Ghazi's boss,Nikitich is hiding. Mustang Squad finds him attepting to flee in a tank and are forced to engage him, resulting in the tank being disabled and Nikitich revealing the location of his superior, Popovich. The squad leads an assault on the Cold War Compound where he is holed up, methodically searching each room in the bunker until Newman and Downs end up confronting him on his Soviet submarine. However, Popovich deftly turns the tables and captures the two, shipping them off to Pablo's jungle compound.

The player then resumes the storyline where they left off after the ambush in the first mission. They flee through the jungle, fighting off Pablo's men as they escape through the ruins. During a brief pause, they contact the rest of Mustang Squad and are directed to an extraction point, where they are picked up in a Huey. The player then takes control of Sgt. Anderson and are ordered to assist in the assault on Pablo's mansion. The player attempts to sneak in, but is discovered and are forced to revert to an all-out assault. The team breaks into Pablo's office, where they find Pablo's translator, who claims he has no loyalty to Pablo and points the player in the direction Pablo ran off in. However, as the player enters the elevator they were led to, a massive explosion throws the player into the elevator's wall, and Rollins is killed. The player is forced to chase Pablo on foot through the local shantytown, fighting off the local militia forces and another Mi-24 Hind, eventually leading to a fistfight with Pablo on his Huey, and ending with the player forcing a grenade into Pablo's mouth and pulling the pin.

Modern Combat 2's multiplayer expands considerably upon the original's, with 5 maps instead of 3, 10 player combat instead of 4, 12 weapons instead of 7, 2 extra modes and a new rank and unlock system.

Modern Combat 2: Black Pegasus features four modes of gameplay, Battle, Team Battle, Capture the Flag and Defuse the Bomb that the Host can select, along with the Time Limit, Score Limit, the amount of players, and wether or not to allow Aim Assist and Health Regeneration.

There are also three multiplayer maps available for download on iOS devices via in-App Purchase for USD$1.99. There is a big chance that this purchase won't work anymore.

A new addition to the series, skills are somewhat comparable to Call of Duty's Perk system, allowing players to choose an ability to help give them an edge in combat.

Ever since its release, Black Pegasus garnered extremely positive reviews, even more positive than its predecessor. The iOS version holds aggregate scores of 90 out of 100 on Metacritic, based on twelve reviews.

IGN's Levi Buchanan gave the game an 8.5 out of 10 (the same as Sandstorm), saying "Black Pegasus is Gameloft's best shooter yet, even better than N.O.V.A., among other positive notes.

Chris Hall of 148Apps rated the game 4.5 out of 5; "the graphics are killer, the sound is great (especially with headphones), the weapon selection is top notch, the multiplayer is great, and the controls are easily the best I've ever encountered. Fans of the FPS genre will certainly not be disappointed with Modern Combat 2. If you've been waiting for a true first person shooter on the iPhone, now is the time."

Modern Combat 2 was removed from the Google Play Store sometime around February-May 2015, despite an update on January 15th. Users who purchased the game can still access it here, and it remains possible to purchase the game through Gameloft's website. It is still available on Apple iTunes for now, though there is a high probability that it will not remain there much longer.

The 2D version of Modern Combat 2: Black Pegasus is a completely different storyline (Java ME, Android, Bada). But the main characters (in many ways) and locations are the same.

The game consists of 11 levels. 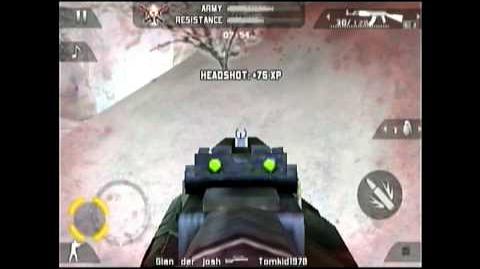 Multiplayer Gameplay
Add a photo to this gallery

Retrieved from "https://moderncombat.fandom.com/wiki/Modern_Combat_2:_Black_Pegasus?oldid=70880"
Community content is available under CC-BY-SA unless otherwise noted.