The NX8 Handgun is not a different pistol than the Beretta M9. Rather, it is a simple recolor for when players spawn on the Resistance team. The NX8 features a brown camouflage scheme and a set of red-colored iron sights. The same recolor will apply when players attempt to use the silenced variant.

In single player, the NX8 is the first weapon used in the game. It is carried by enemy soldiers in "Great Escape" and can be found in the hands of enemies during "Embassy Assault." It has the exact same stats as the Beretta M9, and the difference between the two is purely aesthetic.

The NX8 replaces the Beretta M9 when the player plays under the Resistance faction. Other than the aesthetic differences, it performs statistically the same as the Beretta M9. 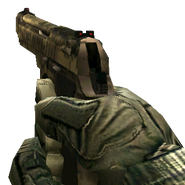 First-person perspective of the NX8 Handgun.

Drawing the NX8 Handgun.
Add a photo to this gallery

Unlocked at level 28, the NX8 Handgun gains a suppressor on the end of the weapon. There is a small loss in damage, now taking 4-5 body shots to kill, though it benefits from a fantastic increase in accuracy, rivaling even the Dradonitch.

This is the more common variant of the NX8 Handgun, as by this time, many players will have learned to utilize the Beretta's accuracy to its full potential. Because there is no radar available in Modern Combat 2: Black Pegasus, the addition of the suppressor is less by this, as it offers no protection from injury tracking (screen turns red, with bloody arrows pointing towards attack direction), as that would make up for its basic purpose; stealth. 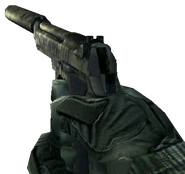 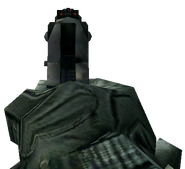 Retrieved from "https://moderncombat.fandom.com/wiki/NX8_Handgun?oldid=60861"
Community content is available under CC-BY-SA unless otherwise noted.