In Modern Combat: Sandstorm, the RPG-7 is very uncommon in the campaign, rarely used by enemies, and only available in a few missions, notably Extraction, where it plays a vital role, used by the player to defend the Palace. The RPG-7 is a powerful tool in the campaign, being a one-hit kill within a mid-sized blast radius. The flip-up iron sights are mostly clear. The main disadvantages with the RPG-7 are its low movement speed and slow reload.

The RPG-7 is available by selecting the Heavy Gunner class. It is somewhat uncommon online, due to a combination of factors. The low movement speed and slow reload make the player quite vulnerable to players with weapons that allow a fast movement speed. The low ammo count of only 2 rockets is also a limiting factor. The noise of the rocket is very distinctive, and will alert any nearby players. Additionally, the rocket leaves a brief smoke trail that can be traced to give a general idea of where the player is.

As such, the RPG-7 is used more as a novelty weapon or as an attempt to get a few quick kills before switching to the M249. A few players would use it exclusively, though. 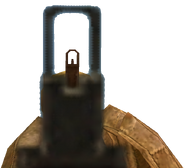 The RPG-7 returns in Modern Combat 2 with updated graphics but is otherwise largely unchanged. It is fairly common in the campaign, with many enemies using the weapon. The player can use it in a few missions, notably To the Embassy Pt. 1, where the player will use it multiple times to eliminate enemy armor.

Unlocked at level 19, the RPG-7 is featured in the primary weapon slot, and has been updated and properly balanced. The movement speed has remained the same, though the reload speed has been lowered slightly, and players now receive an additional rocket compared to Modern Combat: Sandstorm. The rockets are almost exactly the same as the first game, but the smoke trail is now more distinctive. The iron sights of the RPG-7 are obtrusive, but the splash radius renders precision aiming less critical. Just like its predecessor, the RPG-7 does substantial explosive damage, killing any foe near the blast epicentre. The RPG-7 functions well in a hit-and-run type of gameplay, especially when coupled with a submachine gun. The weapon can also commonly be seen in an Overwatch role, or being used as a quick way to eliminate enemy snipers.

The RPG-7's appearance in first-person. 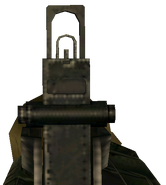 Iron sights of the RPG-7.

As seen when crouched.

World model
Add a photo to this gallery

Retrieved from "https://moderncombat.fandom.com/wiki/RPG-7?oldid=60776"
Community content is available under CC-BY-SA unless otherwise noted.