The Raiders are a Tokyo street gang featured in Modern Combat 5: Blackout.

The Raiders are a powerful street gang who used the chaos created by the chemical weapons attack on Tokyo to expand their reach and power. Under the banner of "claiming the streets," they pillage and kidnap to fund their assault on Tokyo.

The Raiders are first encountered at Rinnoji Temple after it was converted to a makeshift hospital for survivors of the Tokyo attack. The Raiders violently invade the temple to steal supplies, but are repelled by Phoenix, later joined by Tukura as they escape to Roux's safehouse in downtown Tokyo. However, Phoenix and Tukura are attacked by Raiders in the streets, and their truck is run off the road, resulting in them having to make their way to the safehouse on foot.

The duo make their way to the safehouse using a van stolen from the Raiders, however the Raiders follow them there and assault the safehouse in order to steal weapons and supplies. Along with the rest of Roux's team, Phoenix and Tukura manage to clear the safehouse of the Raiders.

The Raider's fate is unconfirmed after Roux's team repels them from the safehouse, however after Phoenix and Tukura break Gilman Security's HQ later on, it is revealed that the Raiders attempted to assault the HQ in order to steal more hardware but were repelled by Gilman Security forces.

The Raiders are quite well-armed and equipped, having looted many weapons and hardware from Gilman Security in Tokyo to expand their arsenal, and have access to firearms, explosives, armored trucks, and even attack helicopters. Raider soldiers come in two varieties; standard troops wear street clothes and sometimes wear facemasks, while elite troops wear heavy jackets and black skimasks.

A Raider wielding an AKS-74U. 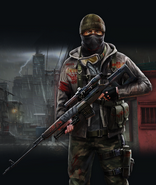 An elite Raider wielding a Dragunov SVD.
Add a photo to this gallery

Retrieved from "https://moderncombat.fandom.com/wiki/Raiders?oldid=69989"
Community content is available under CC-BY-SA unless otherwise noted.