The Red-34 is an assault rifle in Modern Combat 5: Blackout.

The Red-34 is the Tier 5 assault rifle in Modern Combat 5: Blackout. It is a versatile weapon sporting high damage (rivaled by the Charbtek-28) and solid accuracy, but below-average rate of fire. The Red-34 is often considered a "jack-of-all trades" assault rifle, having few severe detriments and being highly reliable in any condition, making it a popular choice of many players. However many players in higher-leagues prefer the KOG V or PR39, as the lower rate of fire and armor penetration of the Red-34 often leads to a less impressive time-to-kill, particularly in close quarters.

The weapon is seen used by Caydan Phoenix in mission cinematics in the San Marco chapter of the campaign. 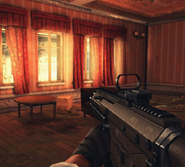 First-person perspective of the Red-34 with a Holographic sight attached.

Phoenix holding Red-34 in the campaign

Customized Red-34 in the campaign.
Add a photo to this gallery

Retrieved from "https://moderncombat.fandom.com/wiki/Red-34?oldid=67574"
Community content is available under CC-BY-SA unless otherwise noted.