The SMASS-410 is a shotgun that appears in Modern Combat 5: Blackout.

The SMASS-410 is the Tier 3 shotgun to be unlocked for the Heavy class. Among pump-action shotguns, the SMASS-410 has the highest damage in its class and is very powerful close-quarters combat; potentially killing an enemy with one shot to the head or the torso. The weapon is also surprisingly accurate with iron sights, making it potent even at longer ranges if the player aims accurately.

Disadvantages of the weapon include its large recoil, its slow reload from an empty chamber, and its slower rate of fire than other pump-action shotguns, putting the player at risk if they're inaccurate with the weapon. If the spread is in the player's favor, the SMASS-410 can be a powerful but unreliable mid-long range weapon.

The SMASS-410's stats and appearance in the Armoury. 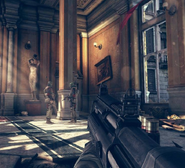 The SMASS-410's appearance in first-person.

Iron sights of the SMASS-410.
Add a photo to this gallery

Retrieved from "https://moderncombat.fandom.com/wiki/SMASS-410?oldid=70799"
Community content is available under CC-BY-SA unless otherwise noted.