The TXR-Reaper is a submachine gun that appears in Modern Combat 3: Fallen Nation.

The TXR-Reaper is very uncommon in the campaign, rarely found and only awarded to the player as a starting weapon in Blood Sand. The TXR is used by Phantom Unit in Dragon King of the Sea and can be found early in the mission with an attached Red Dot Sight and Suppressor.

Unlocked at rank 40 and costing 20,000 credits, the TXR-Reaper is a very powerful and versatile weapon. The iron sights are very obstructive and optics are always a good choice. The damage is medium to high for an SMG, and as such, the TXR can make for an excellent stealth weapon with a Suppressor. One unique feature about the TXR is its excellent performance at even long ranges, allowing for use as a marksman's weapon with an attached ACOG Scope. As well, the Extended magazine attachment will give the TXR-Reaper an impressive 45 rounds for longer firefights, but this is not necessary given its very short time needed for a reload. 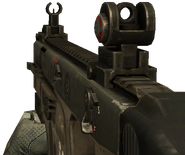 The TXR-Reaper's appearance in first-person.

View of the TXR-Reaper in first-person on the battlefield

Iron sights of the TXR-Reaper.

Firing the TXR-Reaper while aiming down sights.

The TXR-Reaper in the armoury 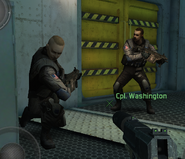 Phantom Unit members Downs and Washington armed with TXR-Reapers in the Bering Strait.
Add a photo to this gallery

Retrieved from "https://moderncombat.fandom.com/wiki/TXR-Reaper?oldid=63217"
Community content is available under CC-BY-SA unless otherwise noted.