The Unfolded Foregrip is a grip in Modern Combat 5: Blackout available only for the Sabre-S2.

The Unfolded Foregrip is first and only grip to be unlocked for the Sabre-S2 submachine gun, offering a mild improvement in accuracy. 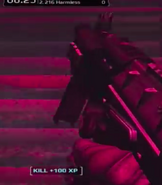 Retrieved from "https://moderncombat.fandom.com/wiki/Unfolded_Foregrip?oldid=63793"
Community content is available under CC-BY-SA unless otherwise noted.