}} The Unified Citizens is a terrorist group led by Edward Page who took part in developing WMDs against the United States. It is the main antagonist faction in Modern Combat 4: Zero Hour.

The Unified Citizens was founded by Edward Page, to destroy the United States. They are responsible for the kidnapping of the US president, which led to the attack on the SGS base in South Africa. The group possesses a biochemical lab in a base on Antarctica, in which they developed the H5N1 virus, the "bird flu". The US Army attacked the base before the Unified Citizens were able to spread the virus.

They appear during the last two campaign missions, fighting US soldiers in their base located in Antarctica. They appear to use very similar weaponry and uniforms compared to SGS. Some uniforms have SGS logo's on them possibly indicating that SGS supplied them with almost everything. 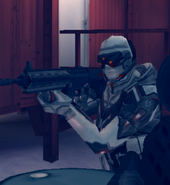 Retrieved from "https://moderncombat.fandom.com/wiki/Unified_Citizens?oldid=41122"
Community content is available under CC-BY-SA unless otherwise noted.