The United States Army is the protagonist faction throughout the game, opposing the KPR Alliance. James Walker first serves in the unit Anvil 1 participating in a mission in Los Angeles and a mission in Hollywood Hills.

Phantom Unit is introduced in this game as a special operations unit.

Walker pulled aboard Alpha 6 by McMaster.

Carter's AC-130 view of a Black Hawk deploying US Army soldiers in LA.

US Army soldiers in Pakistan. 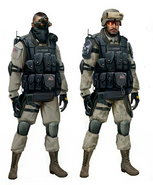 The United States Army appears both as a protagonist and antagonist faction, depending on whether the character perspective is Joel Blake or Edward Page.

Concept art for US Soldiers in South Africa.

Concept art for US Soldiers in Antarctica.

(L-R) Blake, Walker, and two US Army soldiers aboard a US landing craft in the opening cutscene for Red Summit in Hawaii.

US soldier as seen in South Africa holding a Charbtek-28.

US soldier in Antarctica, holding an R780.
Add a photo to this gallery

Retrieved from "https://moderncombat.fandom.com/wiki/United_States_Army?oldid=70525"
Community content is available under CC-BY-SA unless otherwise noted.