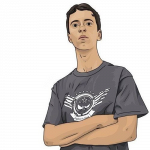 Modern Combat veteran and extreme Gameloft fan. I have been playing Modern Combat since the beginning, and have been playing other Gameloft titles since even before that. Although I did not become involved with the Modern Combat community until late 2012, I have still contributed much to various MC sites in the almost two years since then. I view myself as the most knowledgeable person about the franchise. Seriously. I've just about memorized every MC4 developer's name.

My Modern Combat Résumé, if you will Edit

My Goal For This Wiki Edit

Retrieved from "https://moderncombat.fandom.com/wiki/User:Ijeremy5252?oldid=45008"
Community content is available under CC-BY-SA unless otherwise noted.