The Viny Pro (Italian Light Machine Pistol, Vini Pro on the website) is a handgun that appears in Modern Combat 4: Zero Hour.

The Viny Pro is extremely rare in the campaign, only seen on the mission Terminus with no attachments. It is the player's sidearm.

Available for purchase in the armory at 40,000 gold credits, the Viny Pro is a mid-damage, fully-automatic weapon that is more akin to a machine pistol than a handgun. As expected from a handgun, the Viny Pro dishes out decent damage up close, but is weak at longer ranges. Being a handgun, the Viny Pro also benefits from very high mobility and a fast reload. Up close, the damage while ADS will ensure that your enemy will be downed in three shots if they are not running Paragon Juggernaut or Nanofiber Vest. However, when hip firing, the close range damage is taken down to 30, meaning that it will turn into a 4-shot kill. However, the Viny Pro does have rather high minimum damage, higher than any of the SMGs. This means that the Viny Pro is quite effective out to mid-range,

The Viny Pro, being fully-automatic, has a high rate of fire, of 560 RPM. This is not as high as the SMGs, but it will still ensure that enemies will be dead quickly within effective range.

However, the Viny Pro does suffer from a few downsides. One of which, is that the magazine size is very small, at just 20 rounds. This may be the highest among pistols, but the high rate of fire will mean that the Viny Pro chews through its clip quickly. Extended mags can levitate this somewhat.

Despite these issues, the Viny Pro is still arguably the most versatile and easy to use of the three handguns. Its 20-round clip can be expended quickly, but its fast rate of fire, moderate damage, and high mobility and handling characteristics make it a worthy buy. 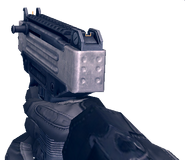 The Viny Pro's appearance in first-person.

The Viny Pro as it appears in the armory

Firing the Viny Pro while ADS.

Reloading the Viny Pro. Note the bullets in the magazine are in 2D.

Sprinting with the Viny Pro. 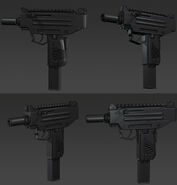 Viny Pro model
Add a photo to this gallery

Retrieved from "https://moderncombat.fandom.com/wiki/Viny_Pro?oldid=63258"
Community content is available under CC-BY-SA unless otherwise noted.