The ZXD is a launcher that appears in Modern Combat 3: Fallen Nation.

The ZXD is extremely rare in the campaign, only seen in the mission Chase with no attachments and infinite ammunition.

Unlocked at Rank 76, the ZXD is the last launcher unlocked, and the second-last secondary weapon unlocked. The weapon features high damage (an instant kill within a 8-9 metre radius, larger than a regular Frag Grenade), a low rate of fire, thanks to its break-action mechanism, and curiously, no iron sights, simply a long Picatinny rail mount for optics running the length of the weapon. Also of note is the ZXD's ability to bounce grenades off surfaces, allowing players to bank grenades off of walls or around corners. The weapon has no damage drop-off, being a grenade launcher. However, the grenades arc heavily after a certain distance, meaning the ZXD is not ideal against snipers at long range. The Rampage-4 would be a much better counter-sniper, long range weapon, as it has an integrated scope, and the missile does not arc. The Rampage-4 is also unlocked much, much earlier than the ZXD, leading many players who want a longer range secondary to go with the Rampage-4 instead.

In terms of attachments, the only available ones are optical attachments, which are largely worthless, thanks to the loss of the crosshair, and for the fact that you will need to aim high for a long-range kill.

Overall, the ZXD is an incredibly powerful weapon, excelling at clearing out rooms, as a support weapon, and can even be used quite effectively as an assault weapon. However, if struck too close to the player, it can result in a premature suicide.

The ZXD's appearance in first-person. 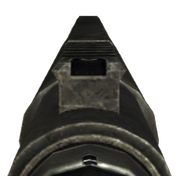 A KPR soldier in multiplayer armed with a ZXD 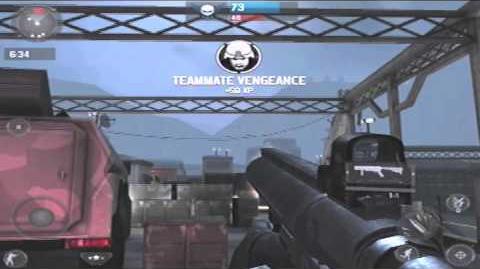